The Sultanate of Oman is a gifted country on the southeastern coast of the Arabian Peninsula in Western Asia. As the oldest independent state in the Arab World, Oman has embraced modernization and progress while retaining the core aspects of its culture and heritage – making it the perfect travel destination for those seeking an authentic Arabian experience. Omanis are very welcoming of visitors from other countries, a fact that is reflected in the generous hospitality extended to guests.

Oman has various tourist attractions, particularly within the realm of cultural tourism. Muscat was named the best city to visit in the world by American travel guide publisher Lonely Planet in 2012 and was chosen as the Capital of Arab Tourism of 2012.

Here We Feature Must Visit Places in Oman

The Muttrah Souq one of the oldest marketplaces in Oman dating back two hundred years. It is located adjacent to the harbor of Muscat and has seen an immense trade in the age of sail, being strategically located on the way to India and China The market was a source of supply for Omanis where they could buy their needs in the 1960s when life requirements were simpler than today. Most of the goods were imported, in addition to local products like textiles, fruit, vegetables, and dates. The main thoroughfare of the souq carries mainly household goods, shoes, and ready-made garments. Further inside, there are mixed smells of frankincense, perfume oils, fresh jasmine, Omani pots, paintings, hookah pipes, framed khanjars (daggers), leatherwork, incense, and spices. 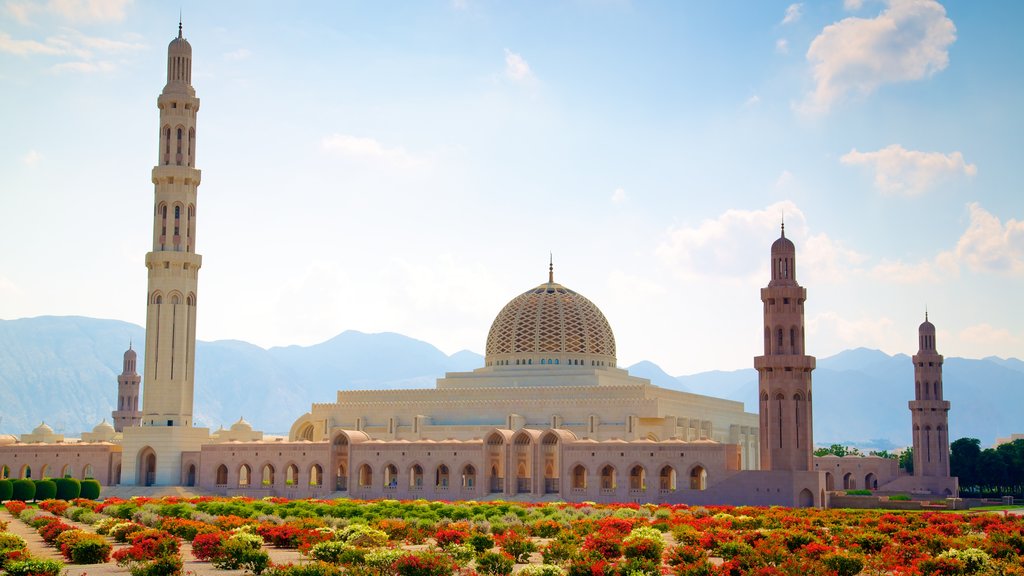 The Sultan Qaboos Grand Mosque is the main mosque in the Sultanate of Oman, located in the capital city of Muscat. In 1992, Qaboos bin Said al Said, the then Sultan of Oman, directed that his country should have a Grand Mosque. A major feature of this mosque is the interior, especially the prayer carpet which covers the floor of the prayer hall. It contains, 1,700,000,000 knots, weighs 21 tonnes and took four years to produce, and brings together the classical Persian Tabriz, Kashan, and Isfahan design traditions. 28 colors in varying shades were used, the majority obtained from traditional vegetable dyes. It is the second-largest single-piece carpet in the world. The mosque is built from 300,000 tonnes of Indian sandstone. The main prayer hall can hold over 6500 worshippers, while the women’s prayer hall can accommodate 750 worshipers. The outer paved ground can hold 8000 worshipers and there is additional space available in the interior courtyard and the passageways, making a total capacity of up to 20,000 worshipers.

Ras Al Jinz is a fishing village located in the Ras Al Hadd, on the eastern shores of the Arabian Peninsula. The village features earth’s raw beauty, with unique landscapes, and extraordinary animals, such as sea turtles, which Ras Al Jinz makes the perfect home for. The Ras Al Jinz beach is world renown for the nesting endangered green turtle (Chelonia mydas), and probably the most important nesting concentration on the Indian Ocean. This is the only official place where the public can watch the unique nesting process of these amazing sea giants, and for that reason, it has an immense impact on tourism in Oman. Ras Al Jinz Turtle Reserve was established by Royal Decree in 1996. Ras Al Jinz Turtle Centre, a truly eco-tourism project, was established in 2008 to help conserve the fascinating and amazing nesting processes of Oman sea turtles, considered a priceless national treasure.  Ras Al Jinz Centre conducts guided excursions every night to view the turtles and witness the nesting process. All the Centre guides are knowledgeable, having a commitment to the preservation of the turtles. Ras Al Jinz Turtle Reserve is managed by Oman Tourism Development Company (Omran).

Shatti Al Qurum, a neighborhood in Muscat, is home to Al Qurum beach, one of the longest and busiest beaches in Oman. It’s near numerous cafés, restaurants, shopping malls, and hotels. Shatti Al-Qurum is the most expensive residential locality situated on the coast of Muscat, the capital of the Sultanate of Oman. This is the most popular destination for expatriates living in Muscat. The common and unique feature of Shatti is the ocean of white houses. An opera house, cinema, theatre, schools, and a hospital are also located there. 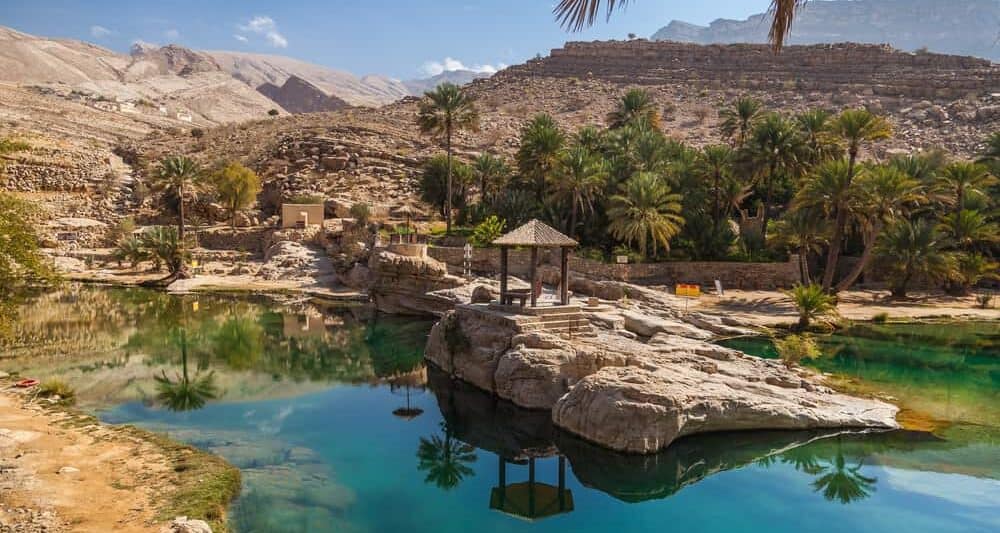 Wadi Bani Khalid is one of the best-known wadis in the Sultanate of Oman. Its stream maintains a constant flow of water throughout the year. Large pools of water and boulders are scattered along the course of the wadi. As a geographical area, the wadi covers a large swathe of lowland and the Hajar Mountains. 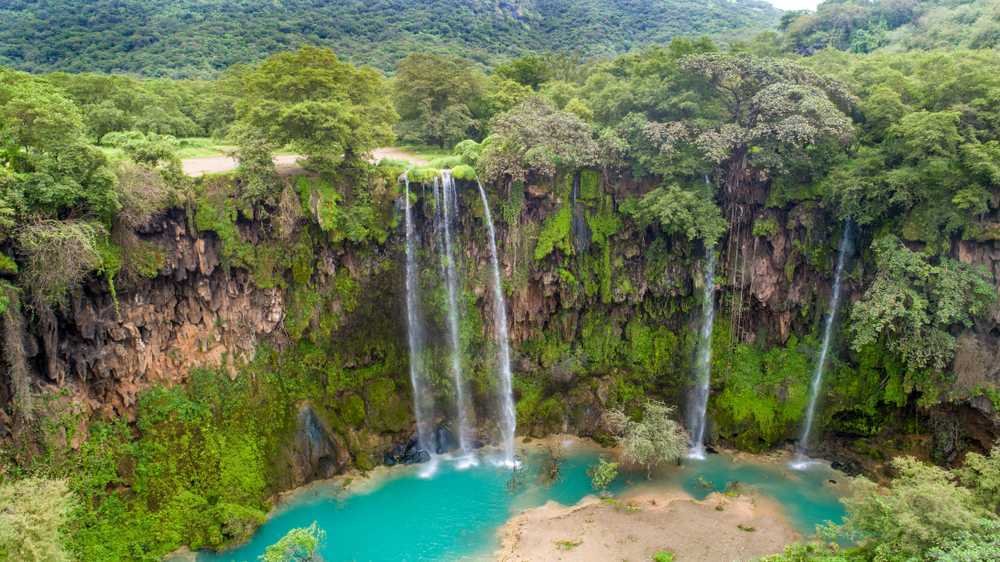 Salalah is the capital and largest city of the southern Omani governorate of Dhofar.  It is the birthplace of the former sultan, Qaboos bin Said. Salalah attracts many people from other parts of Oman and the Persian Gulf region during the monsoon/khareef season, which spans from June to September. The climate of the region and the monsoon allows the city to grow some vegetables and fruits like coconut and bananas. There are many gardens within the city where these vegetables and fruits grow. During the Khareef season from June to September, the mountains turn green, and there are many waterfalls to visit, such as at Wadi Darbat, Ain Athum, Ain Tubrook, and Ain Khor. There are four reputed tombs of Islamic prophets: Nabi Imran, possibly the Virgin Mary’s father but more likely a local prophet; Nabi Ayoob, the biblical Job; Nabi Houd; and Nabi Salih. Amongst the Dhofar Governorate’s cultural attractions is the Salalah carnival, which includes the usual rides, family activities, concerts, cultural events, and vendors. 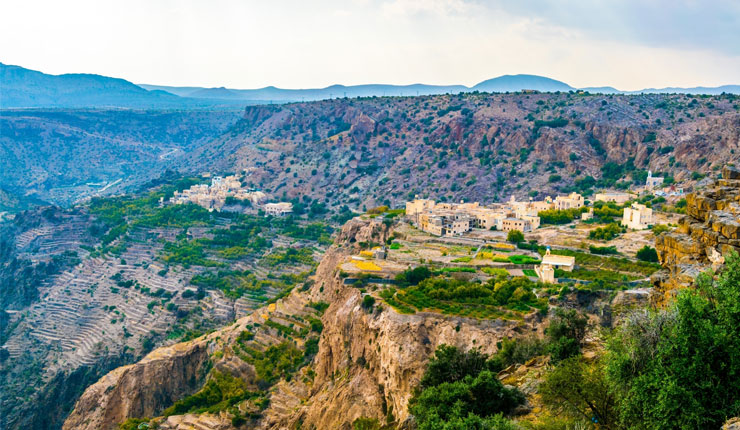 The Jebel Akhdar or Al Jabal Al Akhdar is part of Al Hajar Mountains range in Ad Dakhiliyah Governorate of Oman. It is famous for its labyrinth of wadis and terraced orchards, where pomegranates, apricots, and roses grow in abundance due to its mild Mediterranean climate. This mostly limestone mountain is one of the highest points in Oman and eastern Arabia. Jebel Akhdar lies at the central section of Al Hajar range, located around 150 km (93 mi) from Muscat and accessible only by four-wheel drive. The range is mostly desert, but at higher altitudes receives around 300 mm (12 in) of precipitation annually moist enough to allow the growth of shrubs and trees and support agriculture. It is this that gives the mountains their “green” name.

Jebel Shams is a mountain located in northeastern Oman north of Al Hamra town. It is the highest mountain in the Hajar range and the country. The mountain is a popular sightseeing area located 240 km (150 mi) from Muscat. In the summer, temperature is around 20 °C (68 °F) and in the winter it drops to less than 0 °C (32 °F). Nearby is Jabal Akhdar, another prominent peak in the region. The highest point of the mountain is the North Summit, which is occupied by a military base and is a restricted area. The mountain also has a second summit, the South Summit, which is publicly accessible for trekking via the W4 Trail, marked by the Oman Ministry of Tourism.

Majlis al Jinn is the second-largest[1] known cave chamber in the world, The cave is located in a remote area of the Selma Plateau at 1,380 meters above sea level in the Sultanate of Oman, 100 km south-east from Muscat.   Access to the cavern is only through a free descent of one of three vertical entrances in the ceiling, formed by water seeping through the weakened marly limestone in the zones of fracturing.  Until fairly recently there had not been a way to reach the cave by car, so cavers had to hike in carrying their equipment or rent donkeys from a village a few hours walks from the cave entrance. The original explorers, Don and Cheryl, often flew into the area by helicopter. Now the cave can be reached on a rough track, which requires four-wheel drive. Cavers entering Majlis al Jinn require about 200m of specialized rope and equipment to descend and ascend safely. 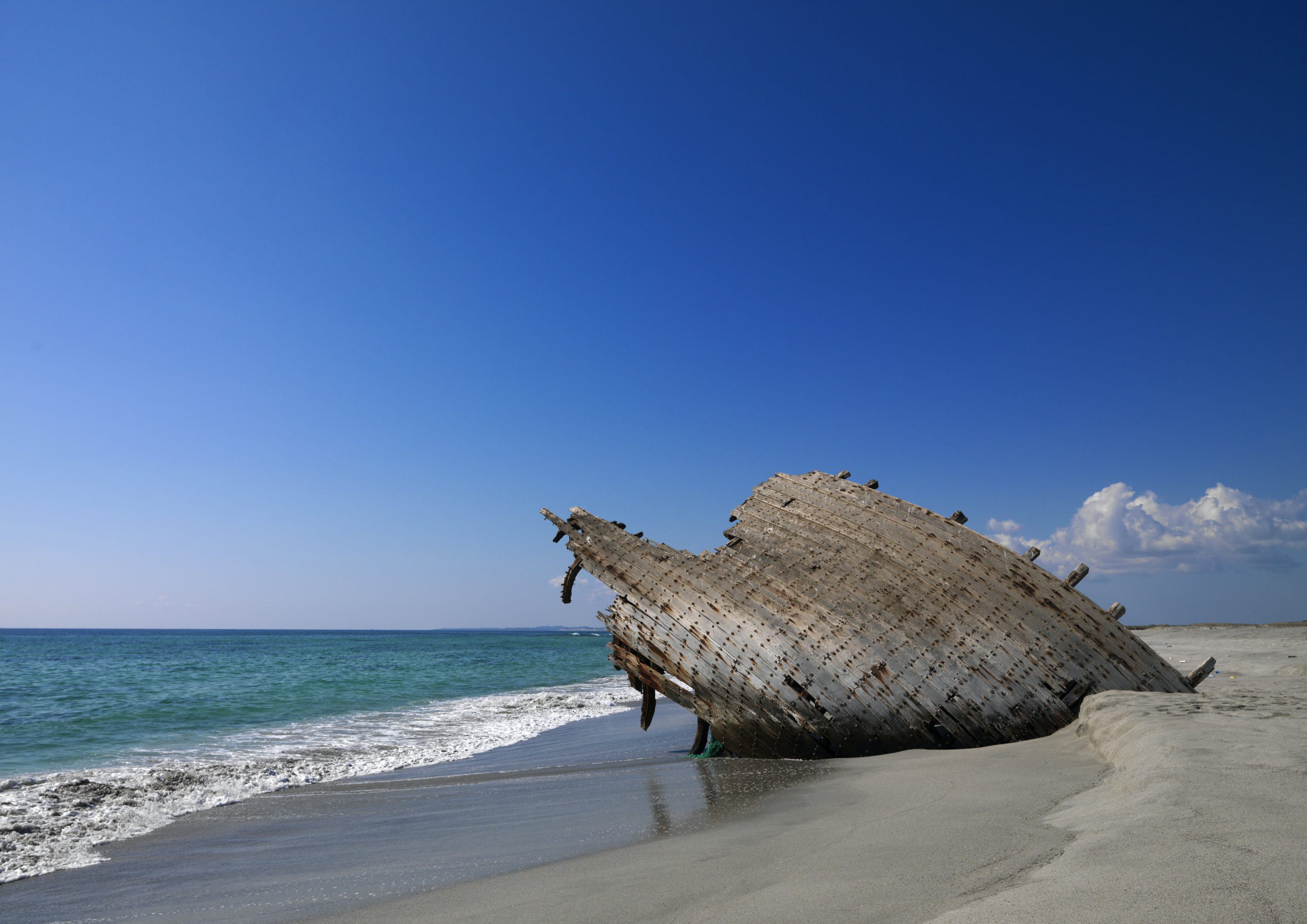 Masirah Island is an island off the east coast of mainland Oman in the Arabian Sea, and the largest island in the country. Masirah Island has just opened for tourism. One can still only get to the island by ferry, managed by the National Ferry Company www.nfc.om, which runs six times a day from Shannah to Masirah. By now, there is a four-star-hotel and a kitesurfing camp. For kitesurfers, Masirah is an attractive spot in summer because of the monsoon winds which blow steadily at over 20 knots The island is an important hatching ground for loggerhead sea turtles, similar in importance to the beaches at Ras al Hadd and nearby Ras al-Jinz as a hatching ground for green sea turtles. Critically endangered and the most unique population of humpback whales also migrate in the waters surrounding the island and Masirah gulf.